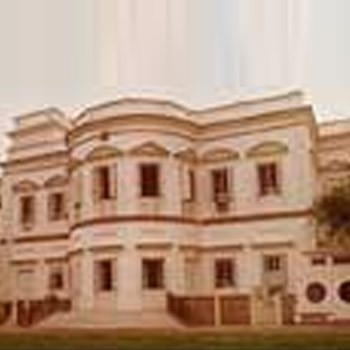 Nestling in the idyllic ambience of a 200-year-old, magnificent building called ‘Aldeen’ in Tollygunge in south Kolkata, originally belonging to an heir of Tipu Sultan, ITCSRA’s locale is appropriate to its musical mission. It seems the natural home for the rebirth of the Guru-Shishya Parampara of Hindustani Classical Music.

The Story of the Mango Tree

Amidst the lush green expanse of the ITCSRA complex stands a bountiful mango tree whose abundant shade has spawned many interesting tales about the early days of the Academy.

The delicious mangoes that the tree, with its luxuriant foliage, yielded aplenty, tempted people from the neighbourhood to sneak in to stealthily savour the succulent fruit. ITCSRA’s security staff would heighten their vigil on account of these intruders. Mr. Kichlu used to sometimes stay overnight at the Academy premises either to complete some work or to interact with the musicians and scholars. After one such overnight stopover, he woke up early in the morning and was standing out on the small terrace of the guesthouse. The terrace overlooked the lawn on which the sprawling mango tree stood.

As he stood and gazed at the morning view, Mr. Kichlu suddenly spotted a portly lady standing under the tree. He also saw a few children aiming and throwing stones at the tree, trying to bring down the mangoes. Eager to nab the mango thief, he rushed down and alerted the security guards at the main gate. He then ran to the lawn to catch the mango thief red-handed. As he went near the tree, he discovered, to his embarrassment, that the mango thief whom he was so eagerly trying to catch was none other than the famous musician Girija Devi!.

Even as she involuntarily hid the dozen mangoes that she had collected, Girija Devi herself burst into embarrassed laughter. Notwithstanding his breathlessness, Mr. Kichlu pretended to be out on his morning walk.